After doing some research on organic versus conventional coffee, I wanted to pass on what I have learned.  Here are the facts:

Coffee is one of the most chemically treated agricultural products on the planet.  Now imagine how years of ingesting artificial pesticides and herbicides are affecting your body and overall health.  Not only do these pesticides and herbicides affect your health, they also have long-term effects on the environment and farmers.  This is why it is important to drink organic coffee instead of conventional coffee!

In order to produce less-expensive coffee, conventional growers cut down rainforests, creating full-sun coffee plantations throughout South America, Africa and Southeast Asia.  In some countries, entire rainforests are being cut down to make new coffee plantations.  And with deforestation, nutrients disappear with the vegetation.  Since there are no nutrients in the soil, chemical fertilizers are added to the plants.  Additionally, since the predators of coffee pests are eliminated along with the forest, harmful pesticides are added.  Deforestation also affects migratory bird populations by destroying their natural habitat.

Unlike these conventional coffee growers, organic coffee companies like Black River Roasters are environmentally conscious.  The coffee plants we buy beans from are grown in the shade of the rainforest, keeping the ecosystem intact.  The ecosystem provides the right amount of nutrients for the plant, and its biodiversity eliminates the need for chemical pesticides and herbicides.  The coffee plants are also used by the song birds as their natural habitat. 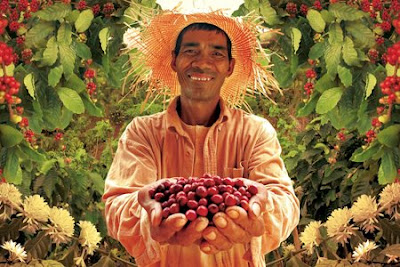 Did you know that over 70 percent of the world’s coffee supply is contaminated with toxic pesticides and chemicals?  The Environmental Protection Agency warns that 30 percent of insecticides, 60 percent of herbicides, and 90 percent of fungicides are carcinogenic.  When artificial pesticides, herbicides, and fertilizers are used, the chemicals stay with the beans and end up in your body, damaging cells and organs in your body and often leading to several types of cancers.  The chemicals accumulate in body fat, and can cause damage to the nervous and reproductive systems.  These chemicals can also disrupt hormone and immune-system function.  Furthermore, pregnant and nursing women who ingest conventionally grown coffee pass the chemical residues on to their fetuses or nursing babies.  Since babies’ bodies contain less fat, the chemicals are more easily absorbed by their internal organs.  Pesticides and other farming chemicals have been linked with developmental and behavioral abnormalities.

Drinking organic coffee eliminates these health risks posed by conventional coffee, and it tastes better! Unlike conventional coffees, organically produced coffee is more vibrant and flavorful.  Many conventional coffees tend to leave you with a metallic or chemical aftertaste, or they are tougher on your stomach since they contain gastrointestinal irritants and cancer-causing agents from the pesticides.

The Farmer’s and Other Rural Resident’s Health

Pesticide use threatens farmers and other rural residents with exposures to toxic substances in the workplace or in water supplies.  For instance, in Mexico serious public health and water quality impacts have been linked to pesticide use.  In one documented case, more than 200 people became sick from drinking water contaminated with agricultural pesticides and fertilizers in the western Mexican state of Jalisco.  Additionally, according to official accounts compiled by Pesticide Action Network North America (PANNA), more than 100 human poisonings and one death were attributed to insecticide use in coffee in 1993; more than 100 poisonings and three deaths were reported in 1994.

Increased nitrogen fertilizer applications have gone hand in hand with the widespread removal of shade coverage from Central American coffee plantations.  Heavy artificial fertilizer inputs in coffee have contributed to nitrate contamination of drinking water in Costa Rica, with the documented groundwater pollution in some cases exceeding World Health Organization (WHO) levels.  In high concentrations, nitrates can cause infant methemoglobinemia (“blue-boy syndrome”), a potentially fatal condition that slows down oxygen transport in infants’ bloodstream.  Other human health concerns surrounding nitrate contamination of groundwater include suspected links between nitrates and certain cancers, birth defects, hypertension, and developmental problems in children.